Inspirational Stories - How Running Transformed my Life, by Chris Hulse.

Nearly 20 years ago Chris, the co-founder of Active Leisure Events - ironically referred to as ALE for short! 🍻 - was an enthusiastic drinker and seriously overweight. Here, he tells the story of how he turned his life around.

Throughout my younger life, I had regularly watched the London Marathon and Great North Run on television thinking that I could never do something like that.  I had every excuse is the book - family, busy job, overweight, asthma sufferer and anyway I had never been any good at sport! I was unhappy at work and was looking for a new direction in my career, however being seriously overweight, who was going to employ me?

Eventually I decided that I was going to make changes to my life and when I woke up on 21st. December 2001, I was determined that I was going to start that very day.   I weighed myself (21 1/2 stone - eek), wrote it down and decided to go swimming that evening and to eat less and more healthily from now on. That day I realised I needed a target to keep me focussed, a big challenge and since I was totally useless at sport, not least running, the perfect goal was to run a marathon for my 40th birthday, just 16 months away. 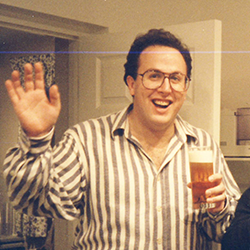 The beginning of the Journey

Of all the time during my weight loss journey the first two weeks were the most difficult, temptation and my usual bad habits were all around me: the vending machines at work (when it was quiet no one could see me buying from them); the sweets offers in the petrol station on my way home from work (2 for 1’s are evil!); the portion sizes that had gradually grown over time; the negligible amounts of walking, there was SO much to change.

I looked for ways to reduce temptation like walking a longer way round at work to avoid passing the vending machines, driving home a different route to avoid passing the petrol station, with all its sweet and chocolate bargains and deliberately but slowly increasing my activity throughout the day.  I increased my activity levels by doing basic things like keeping the tv remote control on the window ledge and walking up and down the stairs each time I got up at home. These and many other small changes dramatically increased the amount of activity I was doing but because each was small, all were achievable.

That first evening I went to the local swimming pool and bought a monthly pass. I was very self-conscious in the changing room but I entered the water and proper exercise began.  Swimming is the ideal exercise when you are seriously overweight, there is no pressure on the joints and the risk of injury is minimised.  I swam six days a week, including early mornings on Saturday and Sunday, which gave me the incentive not to drink the evening before.

After two weeks I found that I had settled into a routine, had managed to break most of my bad habits most of the time and the scales were giving me good news each day.  I needed the discipline of the daily weigh in to stay focussed.  I wrote down my weight each day and nine days out of ten it was decreasing. The weight-loss was dramatic initially but settled down to 1kg a week after the first couple of months.

My swimming had increased, starting at just 125m (5 lengths) and increasing by 5 lengths a week until I got up to swimming 1 mile each time at the pool.  Not only had the distance improved but my speed was better and need for rest breaks eliminated. I was massively indebted to my family who were totally supportive and even changed some of their habits to help and support me.

Pulling on My Trainers

After nine months I was five stone lighter and was finally brave enough to step out on my first ever run as an adult.  I managed less than 100m before I was exhausted, so I walked a bit then ran a bit more.  With my marathon goal as the deadline, over the next two months I increased my running (more like shuffling) to 10km. I was finally starting to believe in myself and the self confidence that I had never previously had was gradually built.

I applied for a charity place in the London Marathon with Macmillan and was fortunate enough to secure an entry with them – there was just the small task of raising my £2,000 sponsorship pledge!   I decided to do that by planning a 40th birthday party, inviting all my friends and family and asking them to sponsor me instead of buying a present.  It was a huge amount to raise, however, the generosity of my birthday party sponsors meant that I very nearly hit the target. 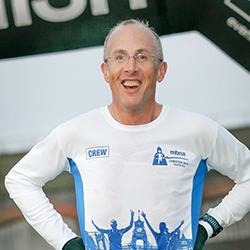 I had noticed that our next-door neighbour used to go running on a Saturday and Sunday morning, crazily running in all weather!  I picked up the courage and asked if he would mind me joining him. He agreed and right from the start was so supportive.  Even though, he was someone who was a better and faster runner than me, he would always help and encourage me to improve.  Also, with a running buddy outside waiting I was not going to manufacture excuses and skip a run.

I was reading everything that I could get my hands on to increase my knowledge of how to train for a marathon; I found and stuck to my training plan like glue.  I was lucky in that my gradual increase in swimming and then running, plus rest days, kept injuries at bay and my endurance and the distances ran were steadily increasing.

The Going Gets Tough

Two months after I had started running, I was made redundant. This could have been the start of a relapse, however, by then because I was massively lighter and getting fitter all the time, I felt confident that I could make a better impression at future job interviews. I was out of work for six months, which gave me invaluable family time and enabled me to re-prioritise and re-orient my life, whilst also concentrating on my marathon goal.

Although I was improving all the time, the runs were getting longer, training sessions more challenging and some of the runs felt really tough.  Looking back now though, I realise it was only PART of the runs that were tough and running in general had become a massively important mental therapy for me. I broke my marathon goal down into many small steps and concentrated on one step at a time, each which I knew was achievable.

The Winds Of Change

One month before my 40th birthday and the 2003 London Marathon I found out that I had got what would turn out to be the job of my life - I was feeling good and well on my way to transforming my life.

As I got closer to marathon day my nerves and excitement grew, I knew that I had done 95% of the training and should be ready, however, my longest run had been 20 miles, how was I going to manage another 10km on top of that?  I arrived in London a couple of days early and went to Expo to collect my number and final instructions. I bought far too much marathon “Tat” with the justification that this was a one-off, (little did I know at that stage this it would be the first of many running adventures!)

After very little sleep the night before I ended up at the start area on a cool Sunday morning. I must have gone to the toilet about five times - pre-race nerves had certainly been effective - Seasoned runners will know what I mean here! I was finally on the start line of the greatest marathon in the world, the race where Paula Radcliffe set her awesome world record which stood for 16 years.  When Chariots of Fire played, emotion took over and I shed a tear or two - I had made it this far, I promised myself was going to run every step of this marathon.

As with many others, I made the classic mistake of starting too fast and got dragged along by the other runners. I felt good for the first 10 miles, so I was having a great time and mopping up the legendary support at the London Marathon.  By about half way, I realised that I had over baked the start and deliberately slowed down. Each mile got gradually slower and more difficult and by 20miles I was really struggling, however I was constantly reminding myself of my promise to run every step. By 22 miles I could have walked faster than I was running but I kept on running regardless.

Finally, I reached Big Ben and was in the last mile where I saw my Mum, Elaine, James and David on the corner cheering me on, which was a massive boost.  I turned the last corner at Buckingham Palace and could see the finish line!  Once I crossed the line the sense of sheer relief kicked in, my legs gave in and I could hardly move. I was thrilled and overwhelmed and vowed never to run another marathon!  I know that I’m by no means unique in thinking that and also no different to many others when after the painful memories had dimmed the following morning, I was already wondering if I could run another marathon in a faster time!!!! 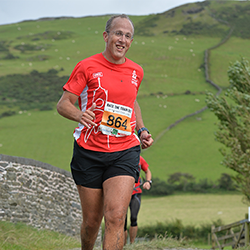 That was the end on the first stage of my running journey, I was hooked, wanted to continue, to run better and faster, but most of all to maintain my fitness and weight loss. Over the last 17 years, I have run over twenty more marathons, plus numerous half marathons and 10k’s.  My favourite runs however are Parkrun.  Parkrun is a phenomenon and has inspired so many to take up running and I’m a massive supporter. As well as running I have mixed up my fitness training and taken part in triathlons and cycling events to keep my enthusiasm and set different challenging targets. 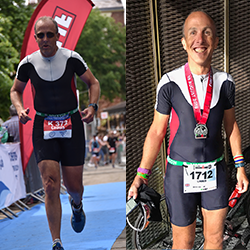 My highlights have been: 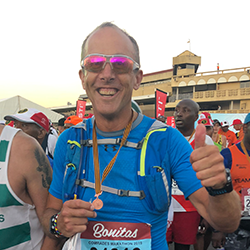 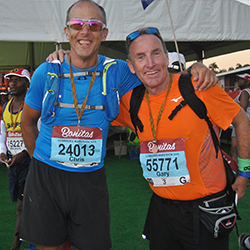 2020 has been a challenging year for so many but on the flipside has seen a surge in fitness and especially running.  I can’t wait for the time that we take once again take part in events and celebrate achievements together.

My motivation behind becoming involved in ALE was to help to organise and deliver class leading running events that were open to all and help people to achieve and maintain fitness and a healthy lifestyle. The greatest honour for me is to be there to thank and congratulate every one of our runners as they finish. There are many other runners out there with similar stories to me and if I can do it, so can they!

With exciting family times ahead, my 2021 target is to run a marathon with my wife Elaine, as Grandma and Grandad marathon!

There have been periods when my achievements were modest and my weight has fluctuated, however, I have always maintained my enthusiasm for running.   Anyway, participating in events is far more enjoyable than racing them hard!!! Constant always in my thoughts is where I was at the start of my fitness journey.  Whilst I doubt I will ever go back there, I have lapses but running makes me smile, provides me with mental meditation, keeps me (relatively) fit and has enabled me to meet so many amazing people.

2020 awards will be announced soon!

Signup for our newsletter

The route is renowned for being fast and largely flat – more than 70% of our runners achieve PBs!

As with all such events, our events would not be possible without the help of a huge team of volunteers.