The first Chester Half Marathon was run in 1982, organised by the Chester Branch of the Rotary Club - and reported on in this article from the Chester Chronicle. The route started and finished at the Chester Racecourse, via Blacon, Saughall and Sealand. 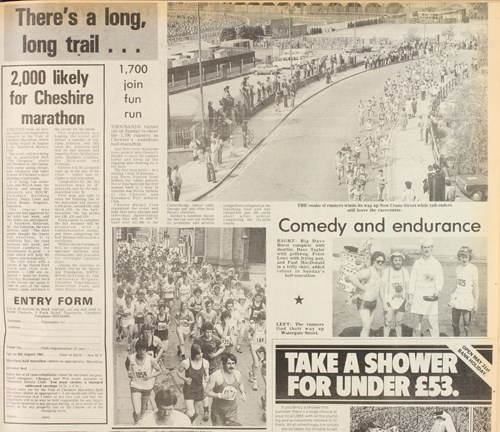 Results for that race have been lost in the mists of time - if you did the race and have a copy of the results please get in touch and we will add them to our archive.

After the 1993 race Rotary handed the race over to Chester and Ellesmere Port Athletic Club (CEPAC), who needed to find a new route to avoid Sunday shoppers visiting the Greyhound Retail Park. The route to the south of the City went out and back through Eccleston, Belgrave and Pulford.

The newly-formed West Cheshire AC took over in 1998. The race continued to be a popular feature of the local race calendar, selling out within days of opening.

In May 2012, Active Leisure Events took on the organisation of the Chester Half Marathon. West Cheshire AC retain strong links to the race, and continue to provide many of the officials and volunteers on race day.

Since 2012 the race has taken place over a new course which starts at the city centre Chester Racecourse and finishes outside the Town Hall and Cathedral, in the heart of the city.

In 2021, the Chester Half Marathon route will change, making it one of the flattest routes in many years but still retaining the racecourse start and spectacular city centre finish.

2020 awards will be announced soon!

Signup for our newsletter